Lavender in the Provence

Who says Provence, says lavender. Lavender in the Provence attracts many tourists every year. And rightly so, the landscape turns a beautiful purple and it smells wonderful. But did you know that there are different types of lavender, that the flowering time of lavender in Provence varies by area and that there is a lavender route? No? Then quickly read on!

Not all lavender in the Provence is lavender! The true lavender plants – which are quite small and grow at altitudes from 600 meters to about 1,400 meters – have very small flowers. Traditionally, it was grown in places where nothing else would grow. This lavender can be recognised by the fact that each twig has only one twig with flowers.

The small lavender plants with their small flowers have largely been replaced by lavendin. This plant is a cross between spike lavender and true lavender. Lavendin can be recognised by the fact that each twig has 3 twigs with flowers. The plant and the flowers are also larger than the real lavender plant.

The scent of lavendin is very similar to that of lavender. Due to the higher yield, lavendin is often used in essential oils these days, instead of real lavender.

The healing effect of lavender

The Romans already knew that lavender smells good; they already used it to bathe or to wash textiles. But lavender also has other properties. For example, lavender oil has a soothing and disinfecting effect, it helps against itching and a few drops of lavender oil in your bath or on your pillow has a wonderfully relaxing effect.

By the way, not only lavender oil is made from lavender. Other products with lavender are soap, ice cream, beer, macarons and honey. And in restaurants you regularly come across the famous dessert crème brulée in a variant with lavender flowers.

Guided tours are organised regularly and during school holidays, children can make lavender soap on Wednesday mornings at this lavender distillery.

Flowering time of lavender in the Provence 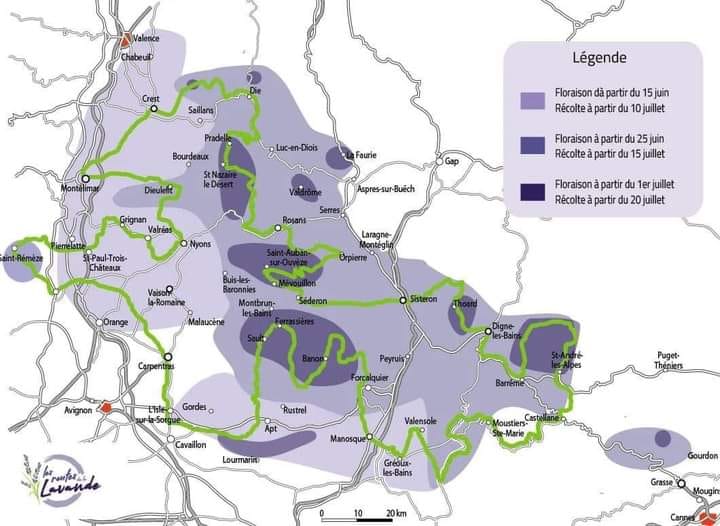 There is also a lavender route that leads past many beautiful lavender fields. The route is coloured in green on the map above. On the accompanying website you will also find information about companies that process lavender and about original lavender-related trips. For example, at Aroma’Plantes in Sault you can make your own oil from your self-picked lavender. You can also follow soap and cosmetic product workshops.

Other unique lavender experiences along the lavender route

Would you like to enjoy lavender in the Provence yourself? Quickly book our gîte!

At our swimming pool

The first year we didn’t do much in the (already) beautiful garden of Le Rêve Provençal. We did do one thing, though, planting new lavender in the border by the pool. In this way, our guests can enjoy the wonderful smell and colour close to ‘home’.

← Vorige: The delicious black olives from Nyons Volgende: Top 10 of activities with children in the Provence →